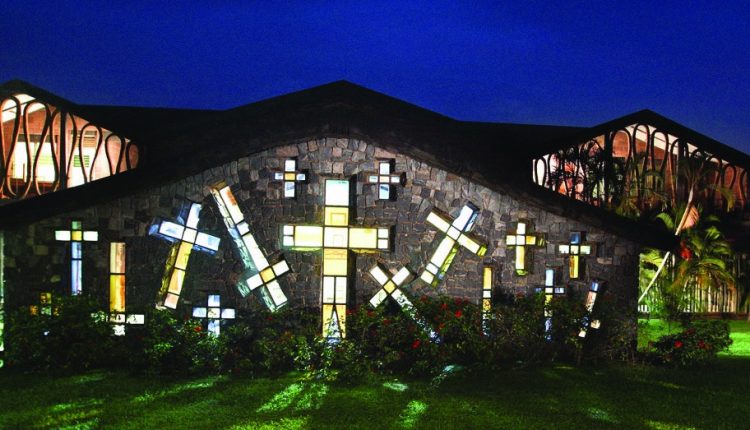 You could call him the true son of his father who was also an untrained architect. Born in 1935 at Idumuje, a small village in Delta state, founded by his father. Demas Nwoko discovered his passion for architecture at childhood and decided to make a career out of it. When he discovered the school he planned to attend in Zaria was more interested in technical craftsmanship and not architecture, he opted out. His innate interest was learning about the art of designing buildings.

This inspired him to study Fine Art to perfect his drawing ability. He soon engaged himself in painting ad sculpting.

However, he abandoned this to pursue a career in theatre. He was the founding Nigerian staff of the school of drama at the University of Ibadan. He worked hard as a lecturer, producer and a director, always preparing troupes for shows overseas. However, all that ended with Nwoko going back to architecture after he led a troupe to stage a dance drama at Festac77 event. This led to his permanent return to Idumuje, where he has practiced since 1978. One of his most notable works, his private home was designed and built in his controversial ‘African architectural style’ in disregard for the traditional European model.

Nwoko believes interior and space ought to be indigenous. According to him “the culture and climate of people should determine how they build and live. What attracted me to traditional African architecture was the comfort level’’. He explained ‘’ The European attempt to introduce tropical architecture to us failed woefully. I don’t see any comfort in it. Therefore, the purpose of adopting a traditional model is that apart from the technology which is cost-effective, sustainable and environmentally friendly. It provides optimal comfort in the climate in which they are. I don’t do designs that are speculative. I do designs that solve a problem I need to solve and that is a cultural thing’’. Nwoko speaks of an African building technology and campaigns boldly for the use of traditional materials such as mud in modern building. He believes this is a cheaper way to build though colonial masters kicked against it; they believed saying mud buildings were not durable. He was, however, remained unwavering in his belief that pure mud bricks or bricks made with a mixture of mud and cement are just as good as those made from pure cement. “Half of Enugu, Jos and Port Harcourt towns were built like that,’’ he says. “I used them to build the Dominican Monastery in Ibadan and in every place I’ve built’’. And from his huge workshop at Idumuje, he manufactures both wooden and steel works.

The Dominican monastery in Ibadan is one of his most remarkable projects, now over 30 years old; it has stood well, its timeless quality underscoring its originality. Noel Moffat, an architecture critic, wrote in the journal of the Royal Institute of Architects in June 1977 that “Here, under a tropical sun, architecture and sculpture combine in a way only Gaudi perhaps, among architects, has been able to do so convincingly.” Most impressive at the institute is the recent work executed on the chapel, sand molded panels and wrought ironwork, which were carried out by Demas’ workmen on their own initiative, and clearly carry the design influence and skills passed on by Demas. Hopefully, this will be repeated in more commissions, which is exactly as Demas wishes, in order to develop the continuum of his work.

As an expert designer whose exceptional skills has been proven over time, his design won the year 2000 competition for the millennium moment to be built in Abuja by the Federal government. The project was later abandoned. Professor John Godwin and his wife, Gillian Hopwood, both renowned architects recently published a book on Chief Demas Nwoko’s achievements as an architect. About the book, Nwoko says “it’s interesting to know that with this book out, many young architects are beginning to see architecture from my own perspective’’

GET THE LOOK – Bedroom Accent