Aside from enabling young kids to get a basic primary school education, the Makoko floating school has motivated the Lagos State Ministry of Physical Planning and Urban development to incorporate the Makoko Floating School in a regeneration plan for the entire Makoko Waterfront community. The school floats down the lagoon buoyed by about 250 plastic barrels, complete with a 1,000-square-foot play-area, classrooms, rainwater collection system, and composting toilets. 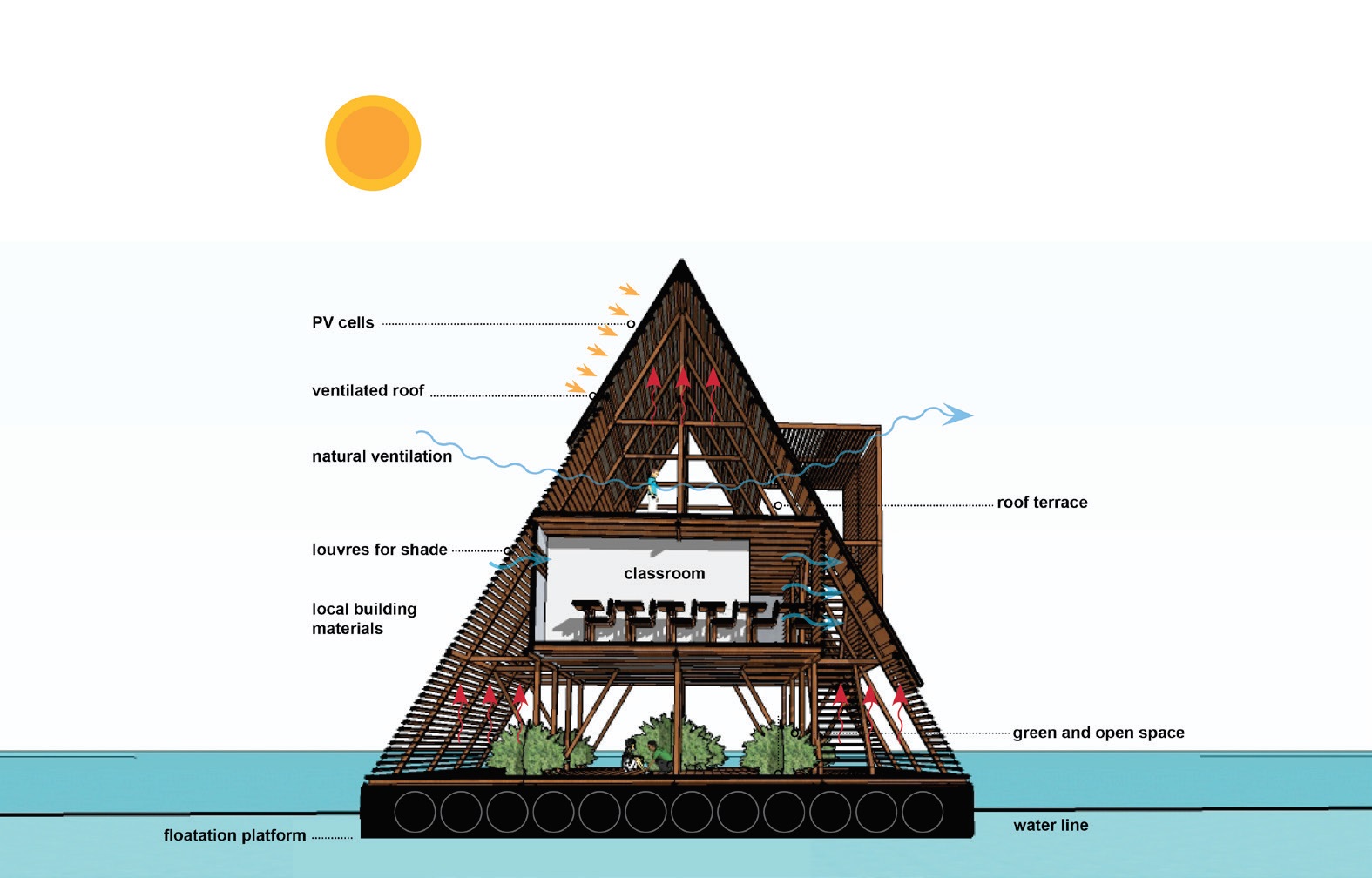 What is Makoko Floating School?

Makoko Floating School is a prototype floating structure that addresses physical and social needs in view of the growing challenges of climate change and an urbanizing African context. It is a movable ‘building’ or ‘watercraft’ currently located in the waterfront community of Makoko on the lagoon heart of Nigeria’s most populous city, Lagos. Makoko is a cluster of communities living on water. For nearly 100 years it has thrived on the fishing and sawing industries. The community is largely built on stilt structures and transportation is only by canoes. It is a highly dense and urbanized area, yet it has almost no roads, no land, and no modern infrastructure. It is believed that over 100,000 people currently live in Makoko. The community is full of social and cultural opportunities, at the same time, faced with severe physical, environmental and political challenges.

Who is the school built for?

The school was initially conceived as an extension to the only existing English speaking school on water -‐ Whanyinna Nursery and Primary School, which served mainly the ‘Egun’ community in Makoko. However, it’s wider community acceptance has brought about a desire for its inclusiveness to serve the entire Makoko/Iwaya Waterfront Community and various ethnic groups. The building is used both for children’s educational needs and for communal use by adults outside of school hours. 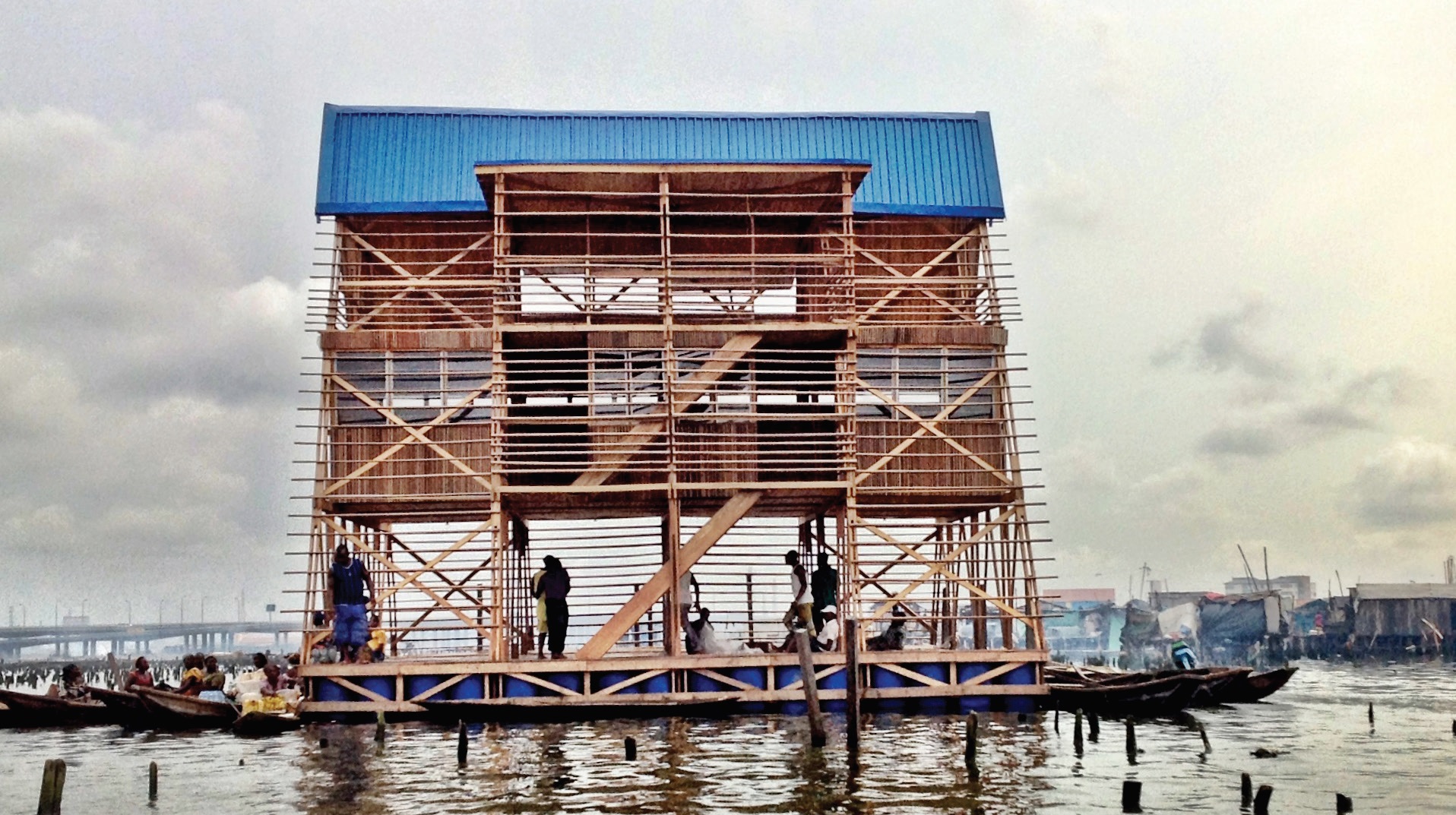 How did the project begin and why?

In May 2011, Founder of NLE and architect Kunle Adeyemi visited Makoko and met members of the community. Inspired by the environment and their way of living and building, he subsequently volunteered to work with them to meet one of their needs -‐ the expansion of a nursery and primary school built on reclaimed land. The school was inadequate, dilapidated and prone to serious flooding that frequently hindered the children’s access to education. For Kunle Adeyemi and NLE, meeting this need was an opportunity to learn and to contribute. For the Makoko community, it was an opportunity for development. Adeyemi and NLE’s relationship with the community resulted in a holistic, innovative architectural solution as well as a wider urban vision that addresses the challenges of urbanization, climate change, energy, waste, water, and food facing many African coastal regions. 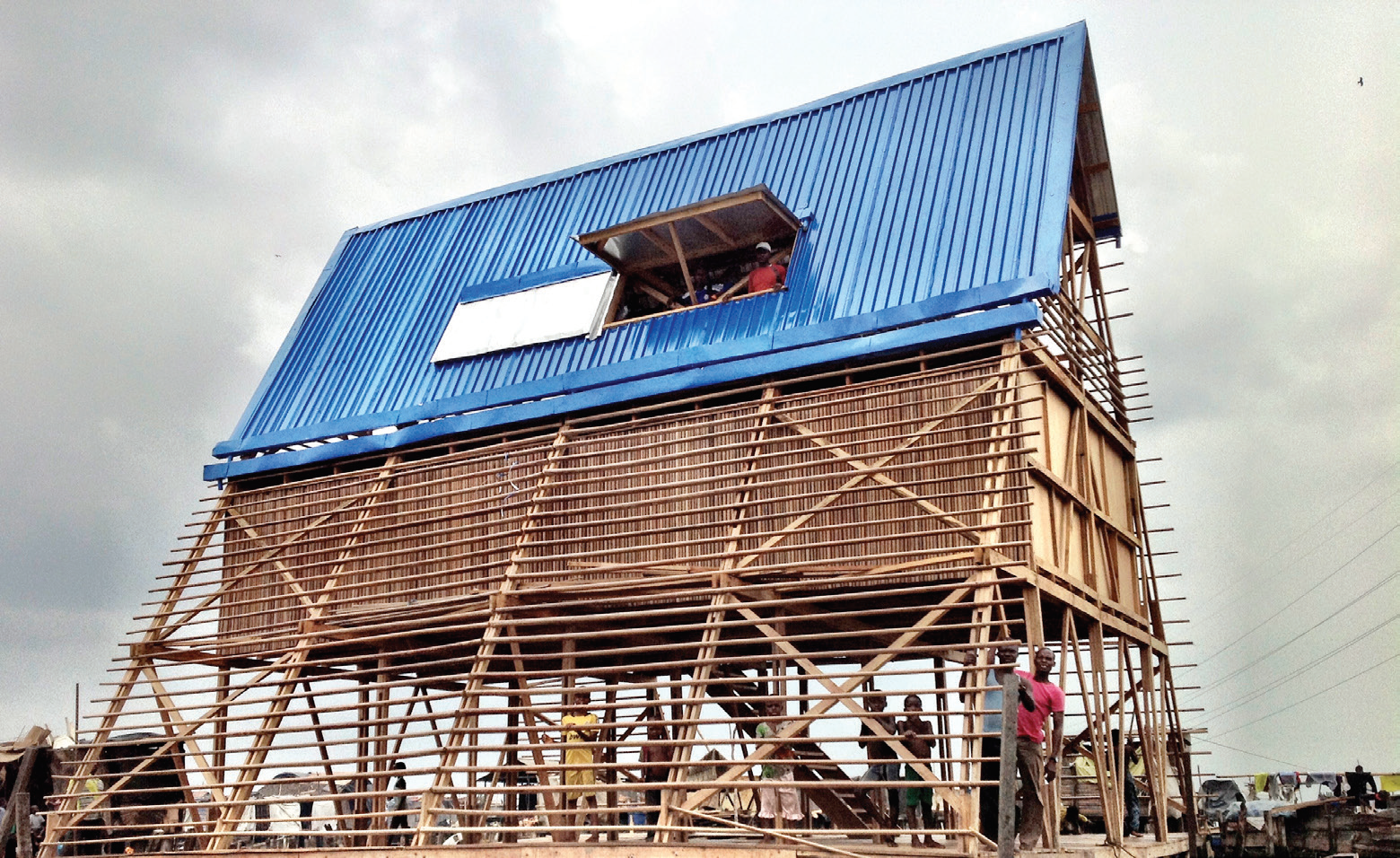 How was the design developed, built and how long did it take?

The design was developed by the NLE team, the local community building experts with international collaborators on specific technologies. One of the key challenges was finding a solution to building relatively cheap and reliable foundations that could support larger structures in the muddy and weak topography of Makoko area. This issue combined with the changing tidal/water level informed a solution to float the building. A number of design options were considered through several consultations with Makoko community experts and NLE’s international collaborators. The final preference was a solution based on the use of locally available materials, labor and vernacular building techniques, combined with relevant global technologies for improvements. This consultation, research & design phase started in June 2011. Construction began in September 2012 with flotation mock-up and testing. Recycled empty plastic barrels found abundantly in Lagos were used for the building’s flotation system, which consists of 16 wooden modules, each containing 16 barrels. Starting in November 2012, the modules were built and assembled on the water, creating the 100m2 platform that provides buoyancy for the building and its users. Once this was assembled, construction of the A-frame followed, led by a team of eight Makoko based builders using eco-friendly, locally sourced bamboo and wood procured from a local sawmill. The frame was completed by December 2012 and the enclosure and roof by February 2013. Development and installations of the building energy, waste, and water systems continued until May 2013. 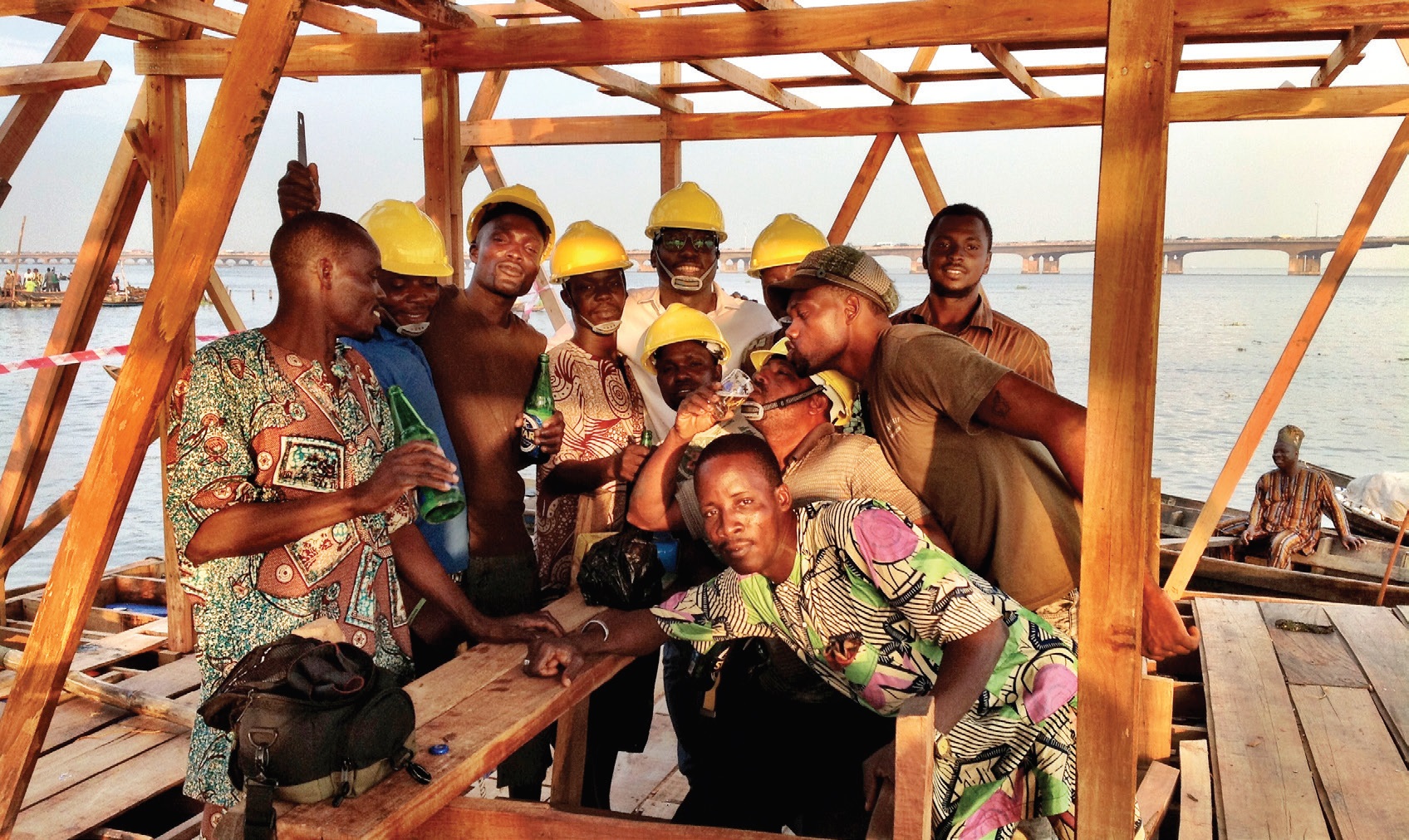 A triangle or pyramid is an ideal shape for a tall floating object on water due to its relatively low center of gravity, which provides stability and balance even in heavy winds. The triangle is also a fundamental roof form, which is also ideal for the wet and rainy regional climate. 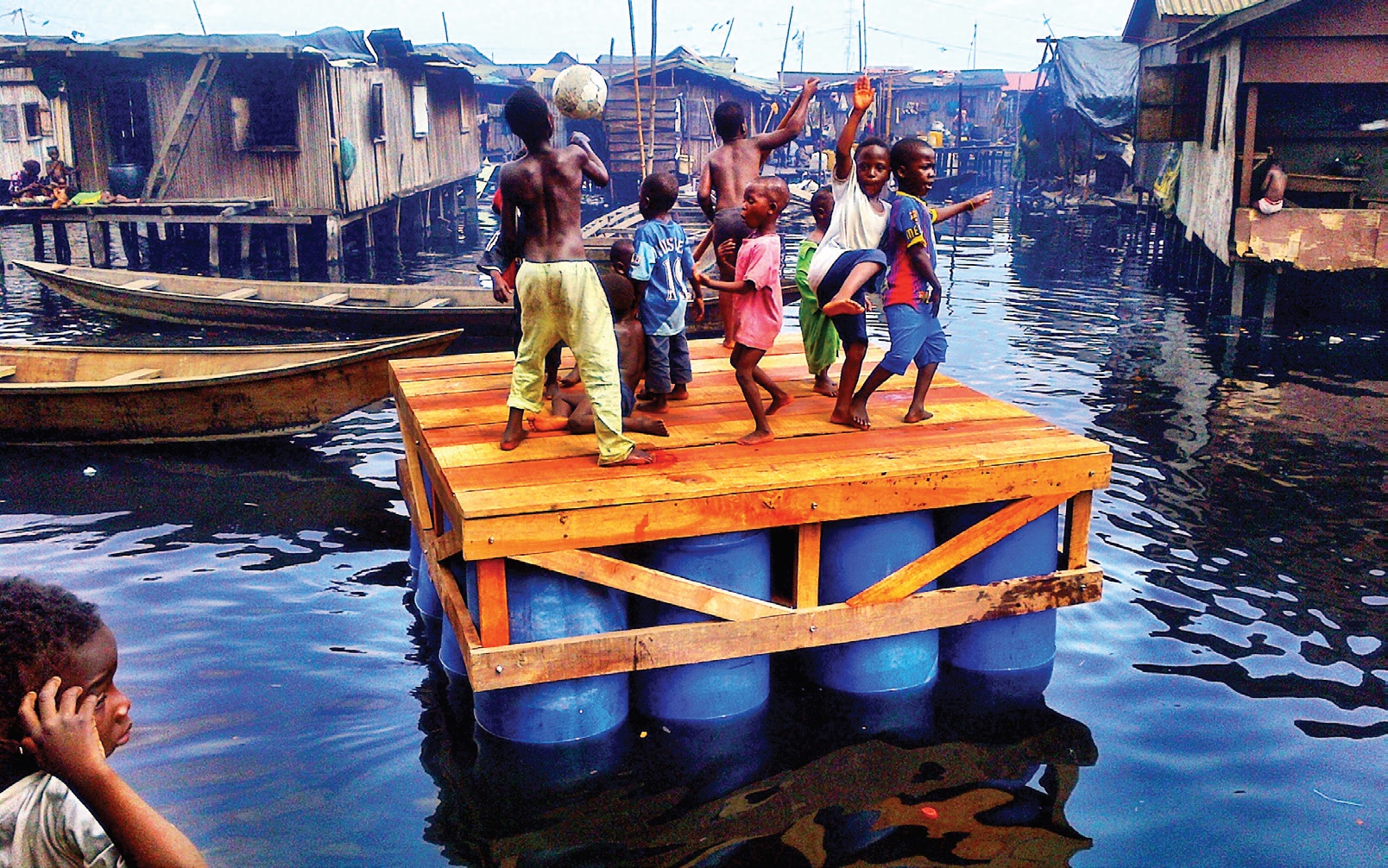 What are the potential risks?

Due to the movable nature of this prototype, there is a minor risk of drift in heavy storms if improperly anchored. There is also a risk of fire spread due to the use of wood. As with risks in any building, both issues have been carefully assessed and mitigated through design. Makoko Floating School employs a combination of temporary posts and retractable steel anchors. A fixed anchoring system is proposed for its long-term docking. The wood used is treated to resist rot and fire.