Five-hundred cameras are placed in a repetitive rhythm in the gallery space. Covering three walls, each camera is systematically hung with geometric precision, facing upright and forward, as if soldiers in full military attention. Each camera’s lens, in varying lengths that identify different areas of focus, are pointed toward the same invisible subject. Whatever these cameras are recording, its intended target cannot escape. The cameras are overwhelming, omnipresent and leave no detail undetected.

In fact, these are not cameras at all. They are creations of celebrated Nigerian artist Olu Amoda, and they are welded together using second-hand steel and wood. As an art installation entitled Spy Agencies in the World, these metal cameras are part of Amoda’s newest body of work that explores questions of privacy and public space in the Nigerian urban environment. These recent works, presented in Olu Amoda’s solo exhibition, Fringe, at Art Twenty One in Lagos, Nigeria, examines the relationship between surveillance, voyeurism, and the female form.

Olu Amoda has worked consistently over the past three decades to create a sculptural language that has unique character and beauty. Working as a sculptor, muralist, furniture designer, and multimedia artist, Amoda is best known for using repurposed materials found from the detritus off mass consumer and industrial culture. His works often incorporate rusty nails, metal plates, bolts, pipes, and rods, that are welded together to create figures, animals, flora and ambiguous forms. Amoda uses these materials to explore socio-political issues relating to Nigerian culture today, from sex, politics, race and conflict to consumerism and economic distribution.

Central to Amoda’s investigations in this exhibition are the influences of technology and how virtual communications shape and prescribe identity. Noting the hyper-consciousness of self-representation that is brought about by the digital revolution, Amoda focuses his attention to the prevailing presence of the camera in our daily lives. Whether self-imposed or brought about by increased modes of surveillance, the omnipresence of cameras and recording devices in these works suggest a cultural obsession with our “public” selves.

Amoda’s installation NSA Columns and Balls, which is spread throughout the exhibition, continues this investigation into self-imposed surveillance. NSA Columns and Balls includes multiple structures that are formed out of the remnants of old disposable cameras. With the plastic viewfinder cut out from these mass-produced objects, Amoda attaches the fragments to various steel columns and circular shapes, along with lights created from repurposed glass bottles.

Throughout the gallery, microphones have been strategically placed to pick up the idle chatter of visitors, and this recording is played back by speakers embedded in the sculptures themselves. As a multimedia and interactive installation, the audience is forced to participate in their own surveillance, and ultimately to relish in the sensorial delight of being recorded and spied upon.

Set amidst these works are new series that reference religion and the sacredness of the private, as well as depictions of women that highlight the conflicting forces of sexuality. These nude and semi-nude women, shown in varying states of undress, represent the workers of the commercial sex industry in Nigeria.

As an ongoing body of work that Amoda has produced throughout his career, the Queens of the Night series depicts his female subjects from varying perspectives and poses, almost to the point of obsession. Depicted from an obtrusive gaze, these women have an eye of being watched and of always watching.

Rather than preaching morality or situating the pornographic as taboo, Amoda celebrates female sensuality.
Eschewing the line between vulgarity and intimacy, Amoda points out that the public and the private are two sides of the same coin and intimately inform one another.

In Holy Communion, Amoda creates a steel frame to hold a circular collection of votive candles, referencing quiet contemplation and prayer. As in the omnipresence of cameras in his installations and the voyeurism of his female figures, Amoda suggests another element of revelation and concealment, this time in relation to religious practices. Amoda’s artistic practice is first and foremost defined by the materials he uses, and he focuses on the contexts and histories of the found objects he incorporates. 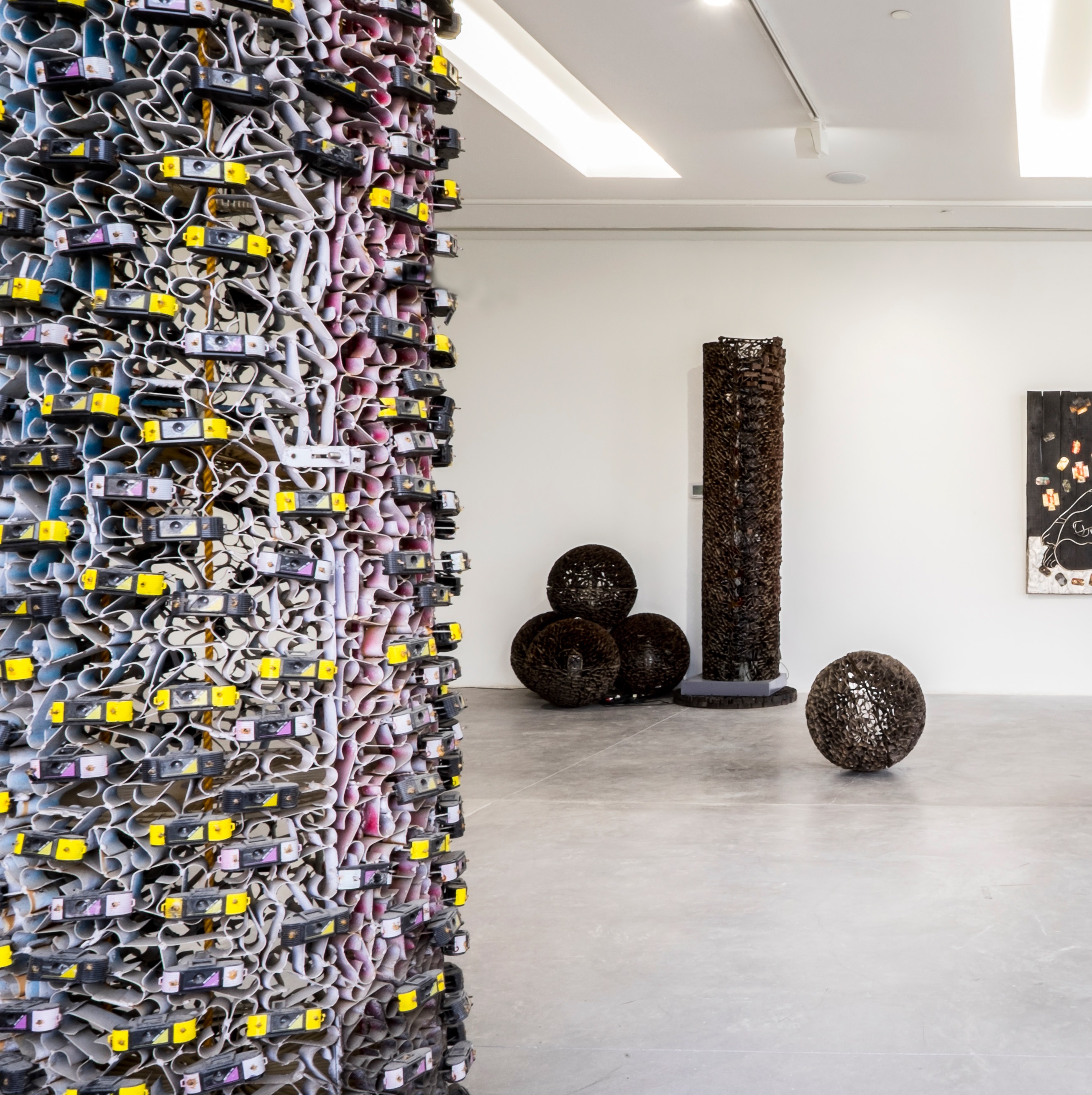 approach to materiality. Incorporating hundreds of rusty nails that have been pulled from wooden crates at Tin Can Island in Lagos, Amoda repurposes these objects as a reincarnation. A commercial seaport, Tin Can Island is the primary destination for the shipments of many of Nigeria’s luxury and consumer goods, which are brought to Nigeria in crates that have traveled multiple destinations throughout the world. By reusing these nails, Amoda breathes new life into them, and they are ultimately placed in art collector’s homes alongside the furniture and objects that they might have been originally used to carry. In this way, Amoda transforms these materials and allows them to transcend their socio-economic status and predetermined fate.

While Olu Amoda has worked in many different directions throughout his career, his artworks always manage to relate back to each other, even indirectly. As he continues to examine consistent themes and methods of looking back at his past work, these ideas concerning public and private space have been circulating for many years, from his use of doors and keys

to the actual gates Amoda has constructed for private homes.
In these latest works, however, Amoda has thought bigger and in larger scale. Amoda’s installations in this exhibition overwhelm the viewer in their visual space, which ultimately relates back to the overwhelming nature of the technologies that he exposes.
Olu Amoda has cemented himself as one of Nigeria’s leading contemporary artists. His work, Sunflower, won the top prize at the Dakar Biennale in 2014 in Dakar, Senegal, and he has exhibited in prestigious international museums around the world including the Victoria and Albert Museum in London and the Museum of Art in Design in New York.
His newest exhibition at Art Twenty One coincides with Art Twenty One’s presentations at international art fairs this year, including Amoda’s inclusion at Art Dubai and the 1:54 Contemporary African Art Fairs in New York and London. a professor of Sculpture and Drawing at the Yaba School of Technology in Lagos since 1987, and he has mentored a rising generation of artists who have studied under his tenure.
With this newest exhibition and body of work, Amoda explores new conceptual territories while advancing his career-long devotion to metal and steel. As Amoda enters the spotlight of the international art stage, he can only continue to charter new artistic horizons.

GET THE LOOK – Bedroom Accent