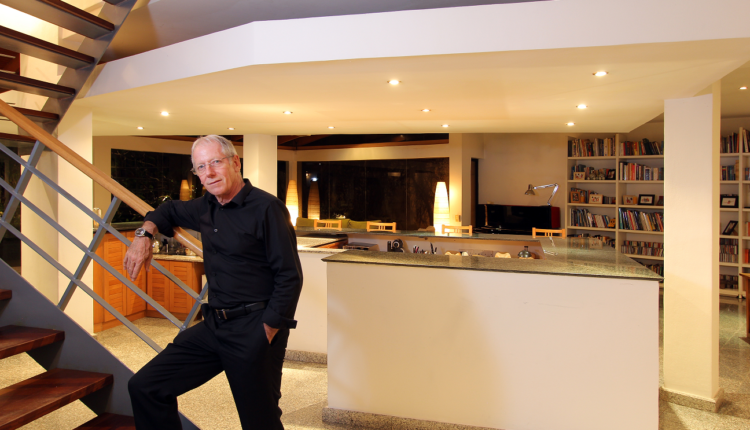 At Home With Alan Davies

What drew you to working in Nigeria?

Actually, I came to Nigeria by chance. I had worked as an architect in the UK for five years and then I did a master’s degree in Town Planning.  After the degree, I worked as an architect planner for a year in London. I found it incredibly boring so I decided to get a job doing a planning project with an architectural practice because I needed to have 2 years of planning experience to be able to register as a planner. It just happened that the first job of that specification was in Nigeria. That, for me, was an unexpected bonus. I was sent to do the master plan of the University of Nigeria in 1980. The whole idea of getting that job initially was to go back into architectural work and forget about planning. So when the London office sent me to Nsukka, they wanted me to stay on to supervise the Library and Faculty of Arts but I asked rather that I be sent to the  Lagos office which is a big office with architects doing a wide variety of  interesting architectural work whom I could work  with, learn from them and be involved.  That was how I started working in Lagos. You ask why I stayed on, and I always say, that  projects  take a long time and during the course of one project  another one starts  so there is  a never a point  where there is  cut off.  Marrying a Nigerian  in 1983 must have had an influence, but the real clincher was being appointed MD of the practice in 1987.

How would you describe your design ethos?

My design ethos is very much one of form follows function. This is an old modernist dictum coined by Louis Sullivan in the United States during the turn of the 19th/20th century. The reason for this is I believe that if you get the design right in terms of planning the building then the form creates itself. So to an extent I am saying that a building designs itself. I will give you two examples of that from my works. The Civic Centre is one where the function is determined by the client wanting certain space on certain floors which is why you have it shaped the way it is. They also wanted a free floor on the middle floor, with no columns, so that is why the truss is there to suspend the floor above, so it is purely the function that drives the shape and form. Another example is Diamond Bank by the Lekki Toll gate in Lagos.  That building is also derived from its function because it was to be an office building but also a drive in branch so when I designed the layout I had the routes to the ATMs coming in on a herring bone pattern and also going out on a herring bone pattern which is expressed in the form of the building above which is why you see the building as a sort of zigzag form. 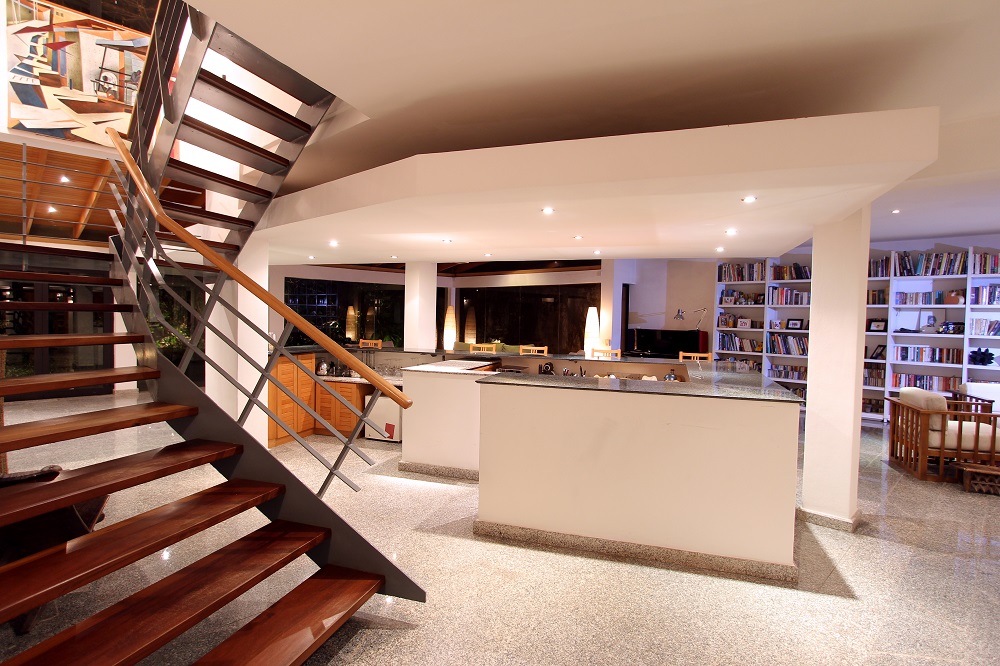 Both building types have their challenges but to a certain extent, they are generic.  Whether one is designing for a corporate client or for the speculative market, your understanding of how the building will be used, be it commercial or residential, is what is important.  The really different type of building to design is the private house.  It represents such a personal investment in the time, energy and emotions of a client.  It is where he will live out his life. The design will impact on the relationships of all those living in it with him.  It is a statement of who he is that all the world can see.  It is therefore likely to be the most important building project of his life.  It is critical for the architect to understand how the client lives and how he thinks.  The client will invariably give much more attention to this project than any other so he will be very closely involved in the whole process and that makes it a very demanding architectural job.  But by the same token, it can be a very satisfying job. 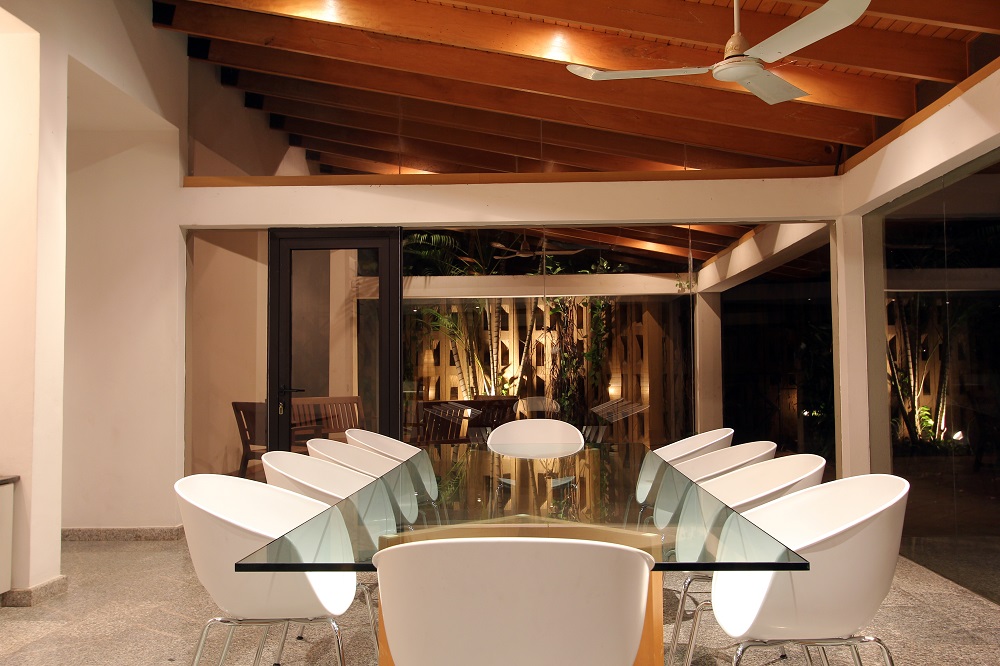 What makes an architecture stand out?

Everybody talks about iconic buildings and clients always say they want an iconic building. First and foremost a building has to be mannered and of good quality but then the ones that stand out are the ones that have forms that are different like the Civic Centre where the roof and style of building is quite different from the usual and catches the eye.  There are others like that that you see around town but unfortunately sometimes buildings get dumbed down. In the process of the design either financial issues kick in or the client might interfere imposing his own design aesthetic.  In the end, I would say you have really got to be quite bold and daring to do something that is going to be iconic. 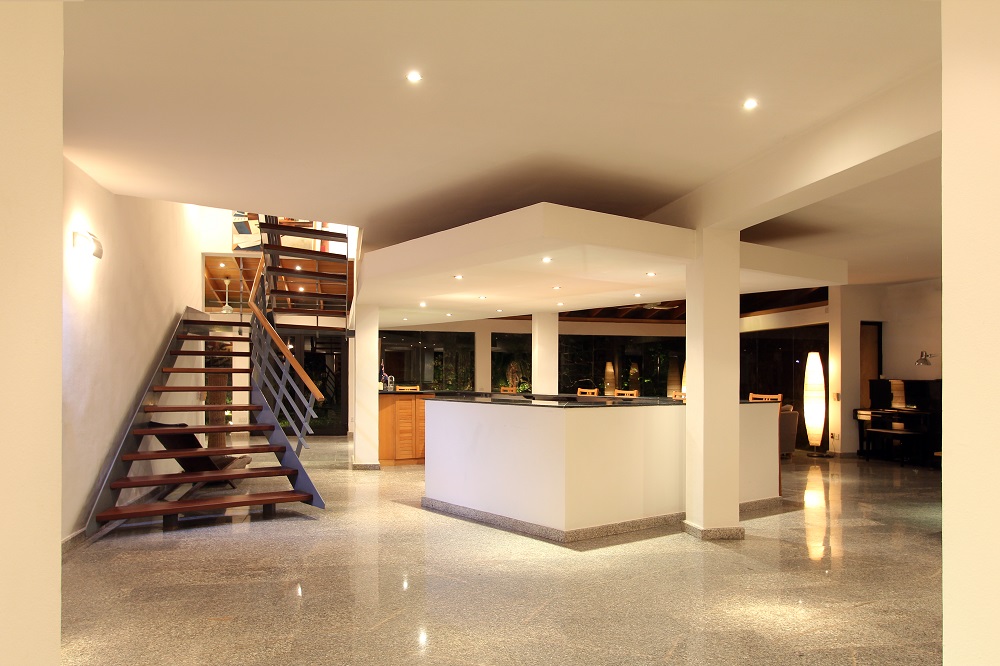 In Nigeria, there are many large projects that practices such as ours get involved in hence there are bigger opportunities. If our practice was in London, for instance, it would be rated as a middle level practice but here it is one of the upper level practices.   This gives us the opportunity to work on large projects and we currently have a dozen major buildings on the go and I don’t think we would have had such opportunities in Europe. The other big difference concerns the planning authorities.   In London planning is very tightly controlled and it is very difficult to get something approved as you have designed it.  Regulatory authorities are very intrusive and demand all sort of alterations. It must be a very demoralizing place to do work. In Nigeria on the other hand, while there are planning controls, there is also more freedom to design as long as you stick within the fundamental planning control parameters.

You have been in Nigeria for 34 years, how would you say architecture has evolved over the years?

One of the biggest changes that has occurred over the years is that architecture has become more international.  People now see buildings in Dubai and other parts of the world and want them here.  We now make use of a lot of glass curtain walls and other modern materials in our design.  This is unlike years ago when we were still interpreting the old tenets of tropical architecture, basically orienting buildings correctly so they don’t suffer too much solar penetration, heatgain and glare. Back then shading was very important and so also putting into considerations factors that allowed the building to be comfortable in environmental terms without heavy dependence on air-conditioning . If you look at Mobil House and Maersk House they both have heavily shaded facades because each floor steps out and shades the windows below. Now I would say we too are more international in our design style and our intention is that our designs are cutting edge. 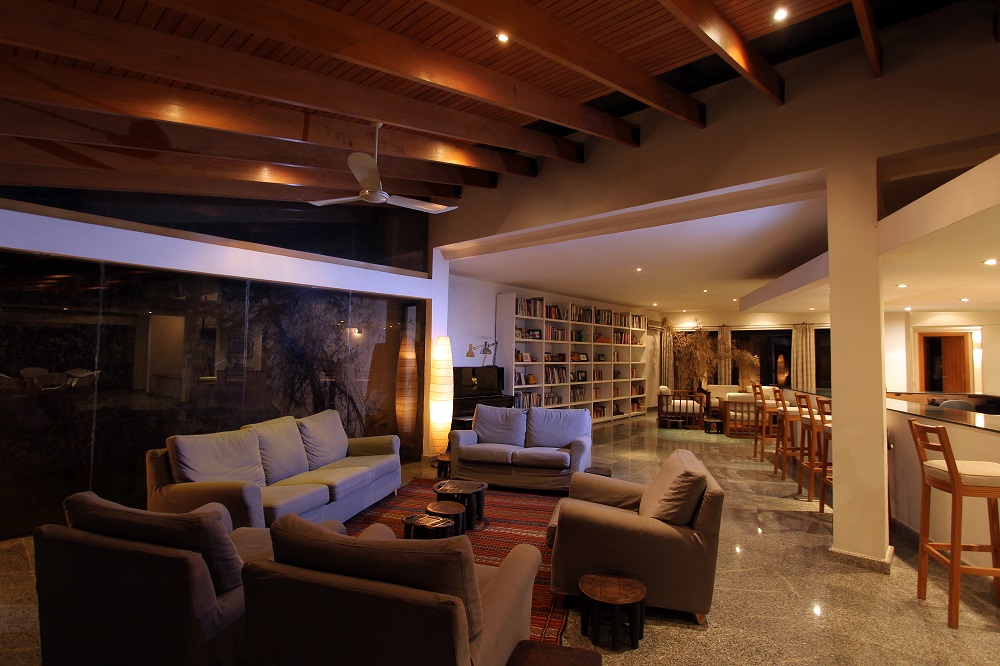 How important are awards wins in building a reputation?

They are important for the publicity they generate.  So also is publishing one’s work which is equally or probably even more important than awards. I remember I had an internationally acclaimed architectural photographer visit and she took pictures of my house for the design magazine of Corriere della Sera.  In the course of discussion, she asked where we publish our work and I had never heard that term before. She went on to explain that all the big international firms publish their work and make relationships with magazines, journals and newspapers.  I would say it is important and so I would thank Essential Interiors who are obviously doing the same for us here in Nigeria.

James Cubitt designed Diamond bank and won the IDEA award for that project. How do you feel about this?

We feel very proud.  But I am now a bit sad because I would have loved two of our current major buildings this year to be eligible for this year’s awards but they are not quite finished. We are doing MTN’s Head Office in Accra and the first building on Eko Atlantic,  a 16 storey Head Office for Afren, and these will be winners when completed. 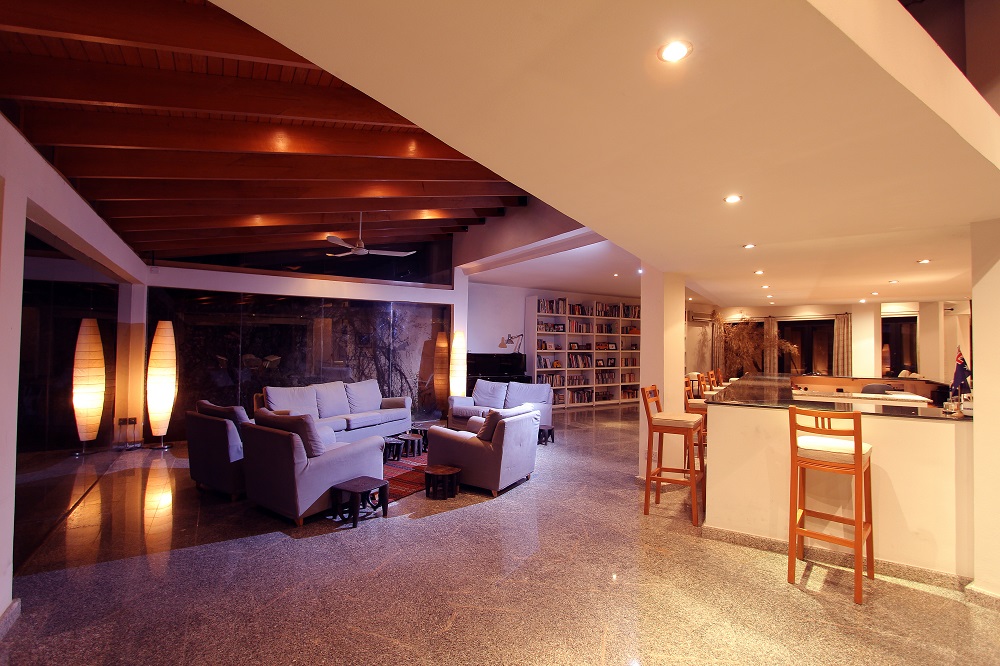 What is your advice to young architects?

I would try to persuade them to be patient. When we all come out of University we don’t know very much but we have been trained to think spatially. It is only when one enters practice that one starts to learn the profession of architecture.  Architecture requires a broad scope of skills. At the initial phases when designing the building you have got to have imagination, space appreciation and be able to draw what’s in your mind.  In the second stage, you have to know how buildings are put together, how to design the minutest details. Then you have to set up a contract and go to tender so you need legal knowledge.   After drawing up your contact, you have to go on site and administer the contract which requires skills in project management and people skills. This entire process will take at least three years,  so, in the first three years out of school, you are probably only going to work on one building  or a variety of  different stages of others.  It is therefore very difficult to comprehend the whole process until one has repeated it several times. 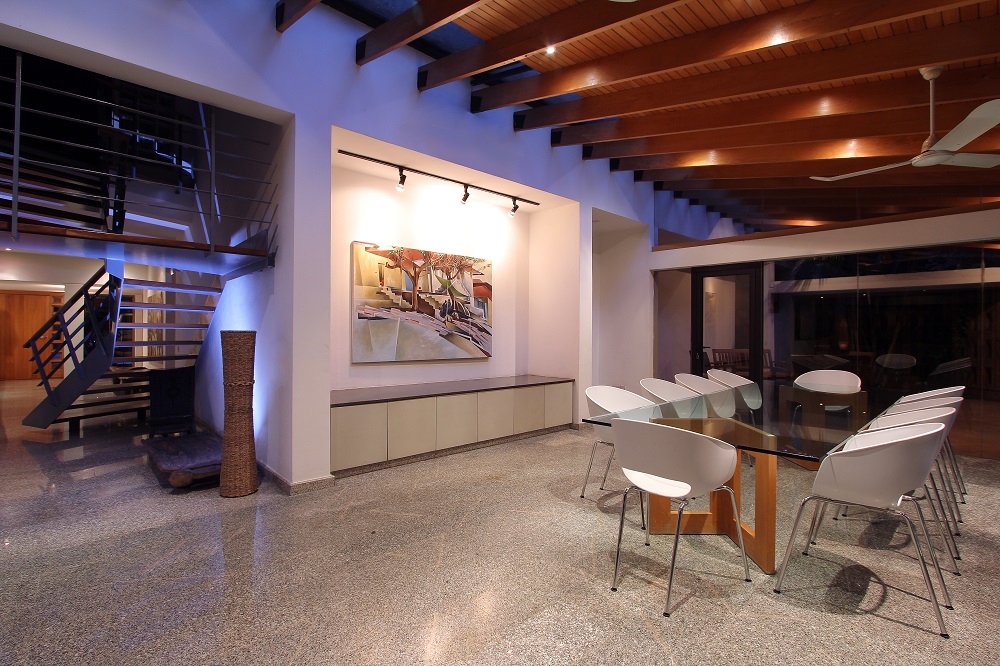 If one is going to go through the process 2 or 3 times, it is going to take a decade. Architecture is a   complicated profession so you have to be patient. Don’t jump at the first commission that comes your way and then go and set up your own practice because you will only get stranded. You won’t have the skills to carry it out and you can’t build a reputation on one job so you won’t have the follow up jobs.

What are your plans for the near future?

The future is exciting because we have become a group of companies. James Cubitt Architects is the primary part of it and for JCA our future is ensuring that we maintain and improve quality. I am also trying to bring up a new generation of architects who will take over the company for generations to come.  I want it to be self-sustaining. To this end we have recently appointed two new Associate Directors.  We also have James Cubitt Interiors, which is a separate company but part of the group, with a rapidly expanding workload and staffing, such that we intend to establish specialist teams for the commercial, residential and hospitality sectors. Then there is a third company, James Cubitt Developments which is involved in the development of some major projects, from operating as  development managers on one end of the scale to setting up all the financing and managing of the projects on the other end. The next step, as we speak, is setting up a facility management arm of JCD. These are exciting times!. 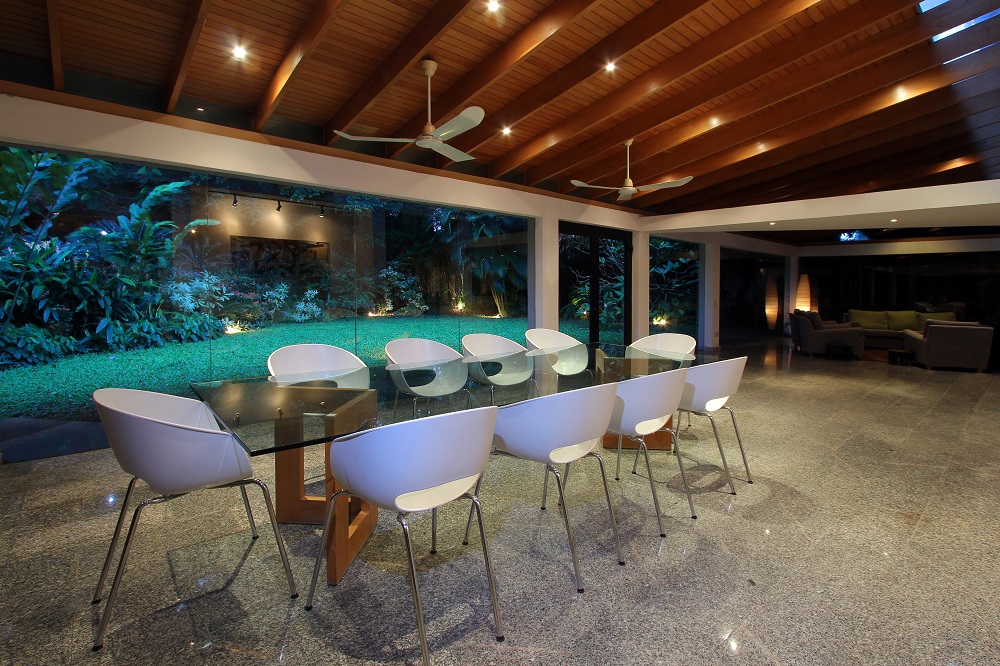 Which of the various projects you have carried out is your favourite?

It is difficult because you are so involved in a project at a time and it is like your baby and then you move on to the next one and that becomes your baby. I won’t say any particular project is my favourite.  We have created some good buildings and every building has its excitements.

Tell us a bit about yourself

I used to be a workaholic. I love what I do and the idea of stopping isn’t attractive to me but I am slowing down to create time for family, but basically I am still here. Architects just don’t retire!  Anyway, where else would I find such perfect conditions for sailing my Hobiecat?