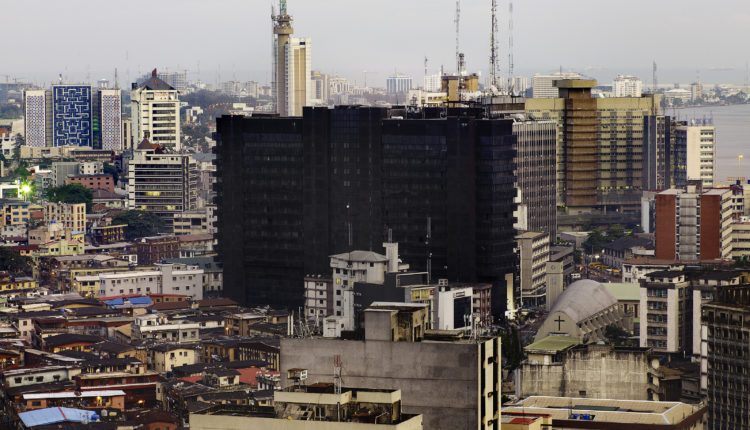 A City in Transition: Hans Wilschut’s Urban Studies Of Lagos

Equipped with his large-format camera in tow, Hans Wilschut traverses the world as a global nomad. While based in Rotterdam, the Netherlands, the photographer could be found in any major city at any given time, from Lagos and Shanghai to Seoul or Johannesburg. Regardless of his locale, Hans Wilschut will be found doing the same thing — exploring the city as a keen observer, trying to make sense of the vast changes taking place in emerging global megacities through his camera. Whether documenting the changing architecture of the city, the population explosion, new construction, or the evolving patterns of development outside of urban centers, Wilschut allows the city to speak for itself. While his photographs are generally void of human presence, instead focusing on lifeless cement and glass architecture, his images nonetheless speak to the social fabric of daily life and of its unseen inhabitants.

While Wilschut’s diverse photographic series span many continents and act as a comparison study for different emerging urban centers, his images are deeply rooted in the local context and the concerns specific to their immediate environment. Wilschut’s ongoing projects in Lagos, for example, have spanned over seven years and ten trips. While many documentary photographers quickly move locations and change topics, Wilschut’s working process starts with extensive research about the city and its urbanisation and continues over many years as the city develops even further. Once in the city, Wilschut starts from the ground level, walking, driving, and taking notes and snapshots. It is only then that the processes of scouting locations and technical logistics begin. Many of Wilschut’s images are physically demanding, requiring a skylight or complex negotiation with the inhabitants of neighboring buildings. As the cities that Wilschut photographs are vast, so must his images be, and he makes a concerted effort to get the right viewpoint that shows the city from a nuanced perspective.

In the Modern Ruins series, which was produced in Lagos and other cities around the world, Wilschut explores the processes of stagnation in architecture. This was followed by The Non City in the Megacity series, which focuses on the architectural contradictions of the urban environment. These abandoned buildings, left either in ruin or with ill-fated futures, serve as a cultural graveyard to the city. While new construction and skyscrapers are erected around them, they stand in quiet dignity as their foundations gradually deteriorate. Many of these buildings were at one time the hallmarks of their eras, for example, in the downtown buildings of Lagos Island built in the area’s heyday in the 1950s and 1960s during Nigeria’s looming independence from colonial rule. Today, as the economic heart of the city moves outside of Lagos Island’s former properties and into newly built skyscrapers on Victoria Island, many of these buildings remain empty of formal use.

However, when a building’s formal use ends, its informal and organic functions begin. At this moment, the city’s local inhabitants take over the city and work around its limitations. In his image Not For Sale, Wilschut documents a building that is stripped to its cement foundations, void of both its roof and windows. Presumably a new construction that was never finished being built, or that is experiencing massive delays in construction, the viewer can spot evidence that squatters have already moved in and appropriated the building’s use for their own purposes. The building’s third floor houses a group of rams, oddly placed in an urban area flanked between the dense buildings that surround it.

As Nigeria is experiencing a massive trend in migration from rural areas to urban city centers, cities such as Lagos become overburdened. The result is a resourceful use of the city’s urban spaces from an individual and grassroots level, where urbanity is contradicted and negotiated to fit the specific needs of its residents. This is evident in Wilschut’s image entitled Center of Excellence, where a massive clearing on Lagos Island, flanked by new shiny glass buildings, has been co-opted for local trade, makeshift businesses, and a massive car park. As Wilschut states, “I find this interesting, the moments where people take over the city and work around its regulations. Most of these works arise from places where in a broader sense development stands still. Sometimes for years and sometimes even for a decade. Through my work, they become portraits of a time and its issues.” In the case of Center of Excellence, Wilschut points out the absurdity of so many cars in a seemingly unorganised lot, a scene that becomes disastrous in the rain.

Wilschut estimates that at some point, seventy percent of the real estate on Lagos Island appeared to be empty in the formal sense. These properties go ignored as one navigates the city and become invisible to most by-passers on a daily basis. These are buildings that are better left unspoken. For Wilschut, his photographs can breathe new life into these issues and create a new way of looking at the city. His image entitled Sealed Property, for example, portrays a property that has been condemned due to an ownership dispute. The building’s doors are welded shut with a public notice of its closure. As a massive building, its stark black exterior is forcibly juxtaposed with the buildings that surround it, existing as a haunting presence that looms over its surroundings. By forcing the viewer to focus on this specific building, the image raises questions over its particular history, its former uses and habitation, its current state of distress and its uncertain future.

As Lagos is a city of extremes, with the disparities between the rich and the poor at alarmingly high levels, Wilschut pinpoints the contradictions of daily life through its architecture. As one of Africa’s most rapidly developing urban centers, these issues keep changing every time Wilschut visits. Wilschut pinpoints two new developments in Lagos that he has increasingly become fascinated with on recent trips, namely the Blue Line rail tracks that span the metropolis and link the municipalities of Marina and Okokomaiko, and the new Chinese architecture that is beginning to dot the city. Wilschut states, “Every time I visit Lagos to work on a project, I discover new projects. Due to the rapid changes, I discover and learn more each visit. These moments of transition are utterly fascinating.” As Lagos continues to be transformed, with Eko Atlantic City rising above the sea and historic shantytowns under increased threat of future development, its inhabitants will continue to adapt and move with these massive changes in urbanism. Hans Wilschut will be there to document these changes in photographs, through the silent structures that speak to the character of the city.